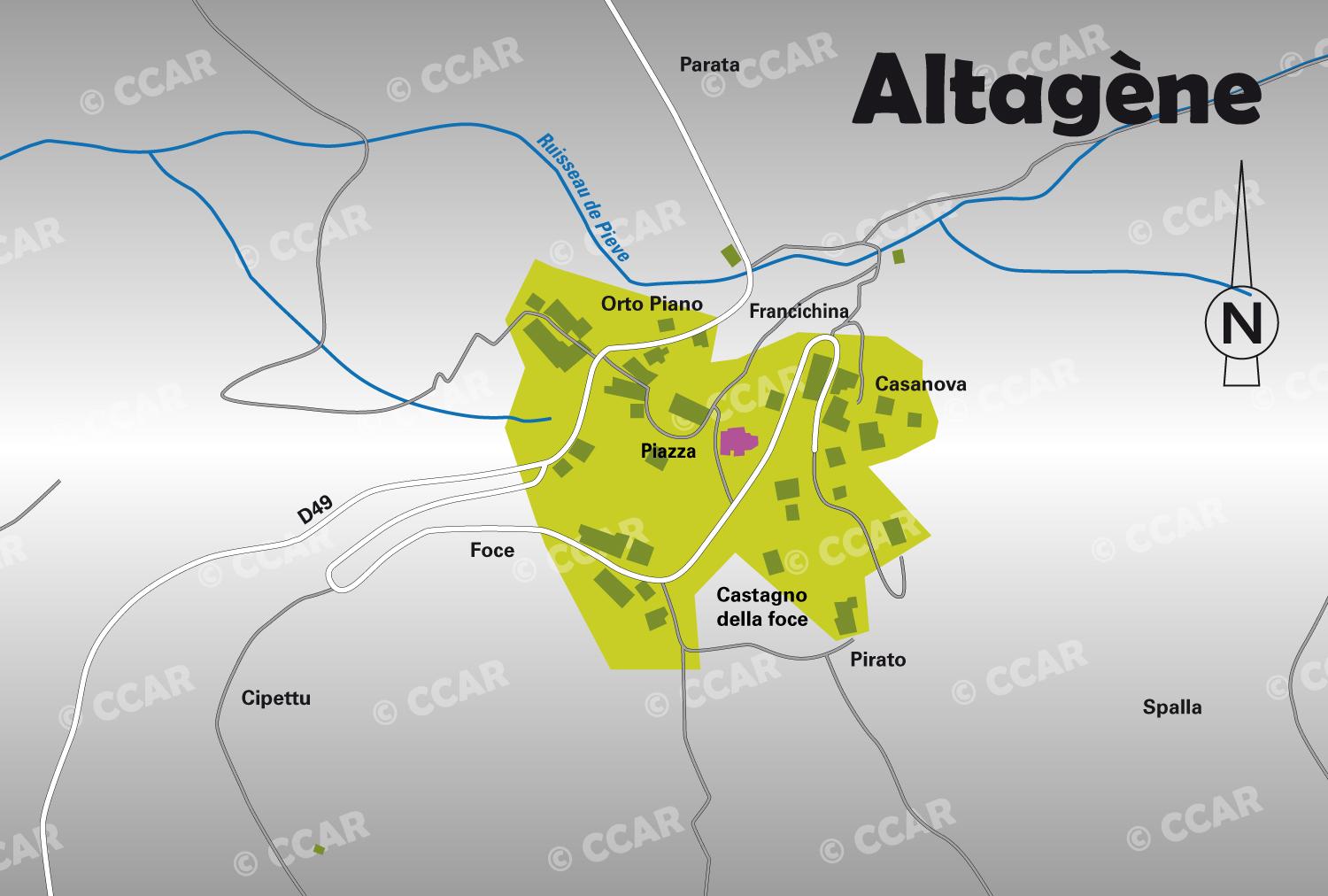 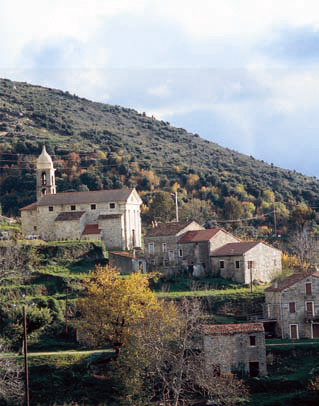 This village is situated in the North East of Tallano. A century ago, there were 200 inhabitants and now they are around 40. Its territory of 5 km (3.1068559611867 miles and 5468.0664916885 yd) is on the hills of the high valley of the Piève stream, affluent of the Rizzanese, and the Sarrado massif of 1033 m (3389ft 119⁄64in). In the north of this massif, men built a “Castellucciu” from the middle age. In the south, Roma would have rudely fortified the place named “Cateddu” to keep under surveillance the little area. The name of this place is due to the presence of the Torre di Sarri in the Middle Age.
Composed of several hamlets, Casanova, Foce, Manchianu, Parata, Piantuleddu this little village historically belongs to the piève of Tallano like Olmiccia, Pggio, Saint André and Santa Lucia. Its foundation would be related to the breakup of the community at the end of the Middle Age.
It offers a human landscape of orchards, olive tree and terrace cultivation with gardens. The oldest houses caseddi shaped are located at the foot of the access ramp to go to the church. Arriving on the road of Sant’Andria, on your left the hamlet of Piantuleddu is built horseshoes shaped around a place you can access by an arched way. This way was in olden days under surveillance from an old tour transformed in a house. This municipality permits cool walks: you can take the road leaving Altagène in the north and walk 3 km (1.864113576712 miles) in direction of Serra Di Scopamena to see an interesting panorama of the next village Zoza and the Rizzanese River. In the North-East, upright, there is the Casanova district which permits you to go to the Sarrado Mountain.

At the centre, at 625 m (2050ft 619⁄64in) high, stands the parish of San Pantaleone (celebration on27th of July) endowed with a beautiful church tower.
Since the 17th century, this church, in granite like most of the houses of the village, has been replacing an older sanctuary. You can admire a wooden statue of Saint Pantaléon, patron saint of the doctors; this is a work of art of a local artist.

In the South East of the municipality the place called “Presa Tusiu” is the place of a village established by an agro-pastoral community in the 5th century BC.
Presa Tusiu was unquestionably an urban area. The constructions are on the totality of its surface that is to say a area around 5 hectares (0, 019305 mi²).
Paved streets marked out by standing stones, original constructions indisputably allude to accommodations, several structures, and everything testifies a singular organisation of this village. This is the prototype of the today’s villages with terrace built with supporting wall. We can observe the presence of a megalithic way and a menhir.
At the second millennium, the village of Bronze Age is created on the site currently called Tusiu. We can notice the presence of a tower which is a real Sardinian nuraghe
The site can not be visited because of the excavations in process.