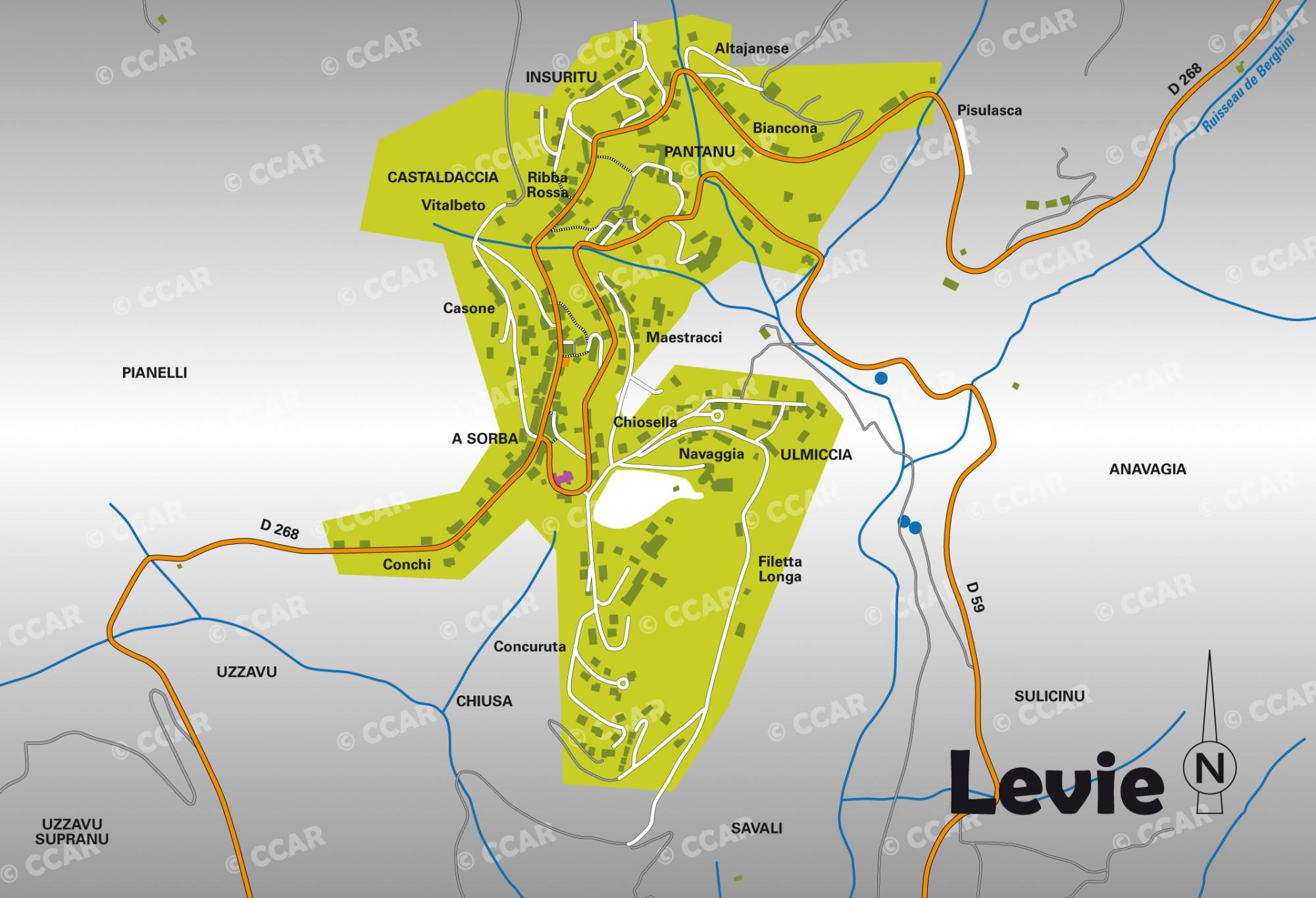 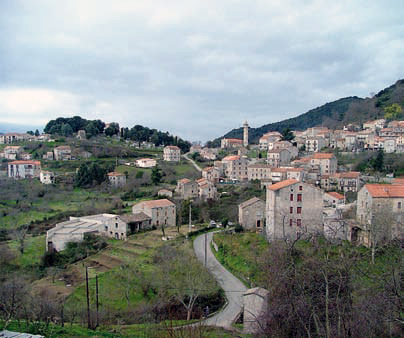 Established at more than 600m high (1968ft 63⁄64in), this vast municipality streches out over 17 km(10mi 991.43yd) between the valley of the Rizzanese River and the Pianu of Levie in the north and the mountain of Cagna in the south. Today, this is the administrative centre of  the Alta Rocca area.

Born in the 15th century from the union of several villages, Levie still keeps different districts where you can find houses with a remarkable architecture: Santa Cruci in the south, A Sorba and U Casonu in the west, Castaldaccia (castel d’Aciu), Insuritu, Pantanu in the north Ulmiccia, A Navaghja in the East.
In the 19th century, the hamlets constituting Levie decided to transform and extend their modest Romanesque church from the 15th century. The new neo classic sanctuary San Niculau, celebrated on the 6th of December, will be endowed in 1871 with a massive lateral church tower composed of several floors. In the hamlet of Pantanu is the church Santa Maria Assunta, near Punta di a Murato, which is said to house Roman vestiges. We can also find a locality, Santa Lucia, called this way due to medieval sanctuary. Tirolu, Carpulitanu, Vignaledda and Funtanedda are other hamlets of the village.

In this museum are united archelogy and ethnology. It reflects 11 000 years of human occupation. You can see the Lady of Bonifacio (La dame de Bonifacio) the oldest human vestigediscovered in Corsica 8520 ± 120 bp (7923, 7105 av. J.C.). The presented items come from the excavations of Pianu di Livia (plateau of Levie), sites of the Alta Rocca area and littoral zones historically linked to the micro area.  This set shows people experiences since the preneolithic up to the Middle Ages (XVI century).

To see: Abeautifully made ivory Christ, presumed work of art from the art school of Donatello, it would have been offered to levie by one of its famous children: Felice Peretti, known as (pontifical name) Sixte Quint, Pope from 1585 to 1590.

Cucuruzzu
The Casteddu of Cucuruzzu is composed of a protohistoric village built in the Bronze Age (around 1800 BC). After the destruction of a circular tower built around 1500 BC, a big complex room has been built (read F.de Lanfranchi). In the casteddu are loggias destined to hand-crafted activities, room to stockfoodstoff and material used for the cereals grinding.
The Casteddu is a wonder of rural architecture of the Bronze Age period. Today, it is qualified of historic monument and belongs to the World Heritage of the UNESCO. From this vast promontory, you will gaze at the great circular panorama on villages and closer summits.

Capula
The Casteddu stands on a hill full of oaks and is the heart of feudalism. It constitutes a marvellous part of medieval history of Ata Rocca. You access to the summit by an access ramp in the olden days passable on horse. The architecture of its high walls is diverse: little granite bricked up with lime pavement (from the Middle Ages) and big bonds walls were built back in the Bronze Age and Iron Age.
On this casteddu was organised a fight against the Saracens, but also  the faith winning back lead by the mythic Ugo Colonna from the IXth Century. The Biancolacci lords raised a castle, the siege of the Count of Corsica. High place of the medieval architecture, the Casteddu of Capula is guarded by a reinforced standing statue from the Bronze Age.