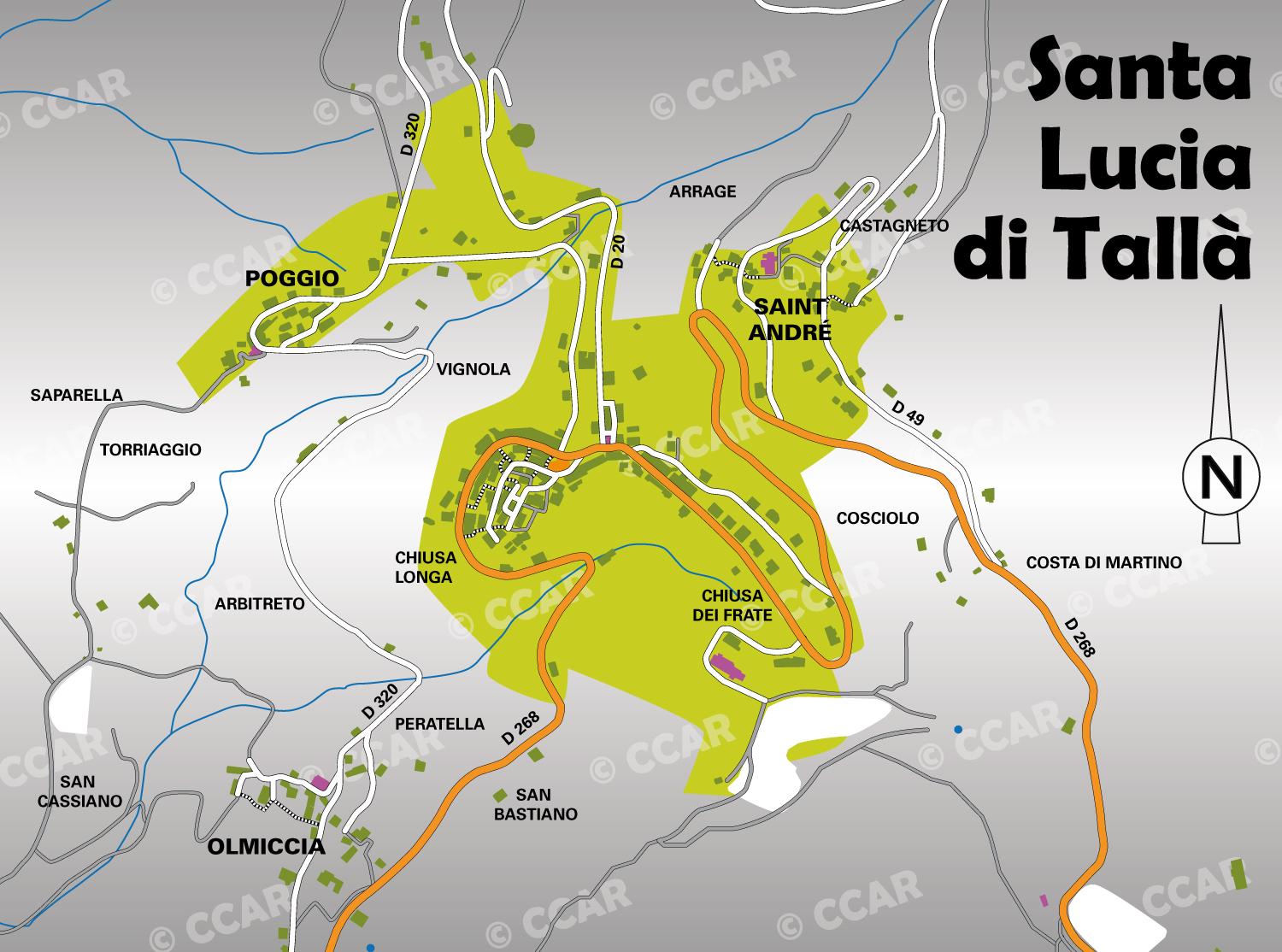 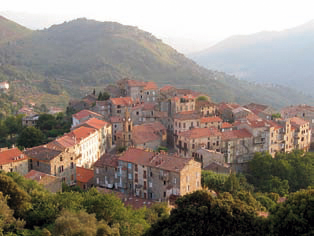 Located at 460m high (460m = 1509ft 215⁄64in), in direction of the Gulf of Valincu, this village is surprising because the architecture. It is composed of high granite houses and narrow streets
Fief of the lords of Alta Rocca up to the murder of the Count Rinuccio by Genoa in 1511, it was the feudal capital of the Alta Rocca area and of the pieve of Tallano. The area named Cudetta (the hill) was the heart of the village ruined (by Genoa) at the beginning of the XVI th century. In this area there were old houses built in the same century on the medieval foundations of the village.
A legend says the word “Attalà” would come from the Arab chief screaming: “at Hallàh” translated “this is a gift of God”. But we can also think that it would come from the fact that in Corsican language, it designs a sloping part of the mountain. Anyway, both are not incompatible: the soil is generous, this is a notable local oliver grove that covers more than 80 hectares (80ha = 197ac 29808ft²). Here, olives are collected at full ripeness and give golden oil with numerous virtues.  Every year at the beginning of March, on the occasion of the celebration of “Festa di l’olio novu” (celebration of the new olive) Sainte Lucie celebrates olive growing. In the South of the village, coming from Sartène, the square Ricciaghia called Ricciadia too comes from the little fortification that was at this place before. In the recent area called “la Bastaglia”, there are high granite houses. At the centre of the village, la Piazza Di l’Ulmu (the place of Elm) was in the olden days the priest church of Santa Lucia’s garden. Giving a point of view on the hamlet of Poghju, you will find an imposing fountain from the XIX th century (1875) and a precious war memorial.

The monastery of the end of the XVth century is composed of a church with a Baroque bell tower and buildings where the Franciscan monksused to stay. We can see the inside polychrome marble altar (white, red and black) and stalls of the wooden choir from the XVII th century.  We celebrate Saint Anthony of Padua on the 13th of June and Saint Mary on the 15th of August. Real symbol of the pieve, this monastery was built by the Count Rinuccio Della Rocca who was a powerful feudal war lord full of devotion.

Parish Church
In that Baroque church from the XVIIth Century with a unique nave, we can admire a white marble low relief from 1498, retable of the Madonna with Child and a crucifixion which is a work of art from the Catalana Valenciana school art, work of art presumed from the Master Castelsardo.

The particular and meticulous composition of well cut stones, its immense door, its nave and the central axe make this chapel a work of art of Roman architecture. Its string is sculpted with human masks and boars head; The cornice of arches is adorned with modillions (ornamental brackets).You can access by taking the hiking path in direction of Loreto. You can also visit monumental churches of Saint André de Tallano and Bisè, the chapels of Saint Roch, Chialza and Orriu.

The oil mill
Dated from the XVIII th century, U Fragonu (the big Mill) is one of the old mills of the canton. A beautiful paddle wheel could make it work with water from the stream.  It has been transformed into the museum of Olive oil.

A casa Turra, from around the XVIth century is qualificated « historic monument » (French Appellation). This is a square line tower of 10m (10m = 32ft 945⁄64in) in which the inhabitants went to take shelter. It overlooks the old village of 15m high (15m = 49ft 235⁄64in). Equipped of machicolation and loophole, it linked to a latent insecurity, a social hierarchical organisation able to overcome at a local level difficulties.

Sainte Lucie de Tallano owns on its territory a hot spring of sulphurous water which spurts out at 40C° and has curative properties (dermatology and rheumatology). This hot spring is located on the outskirts of the Fiumiccicoli River.

This igneous rock crystallised in concentric shapes is one of the treasures of the village because of its beauty and rarity. Called “Petra Ucchjata” in Corsican language (eye stone) this rock results from the association of two minerals which are the white feldspar and dark green amphibole. In spite of its discharged deposit, you can admire it on the war memorial where it was used to built the base.

This nice path permits to discover the fauna flora and the local rural life thanks to road signs.