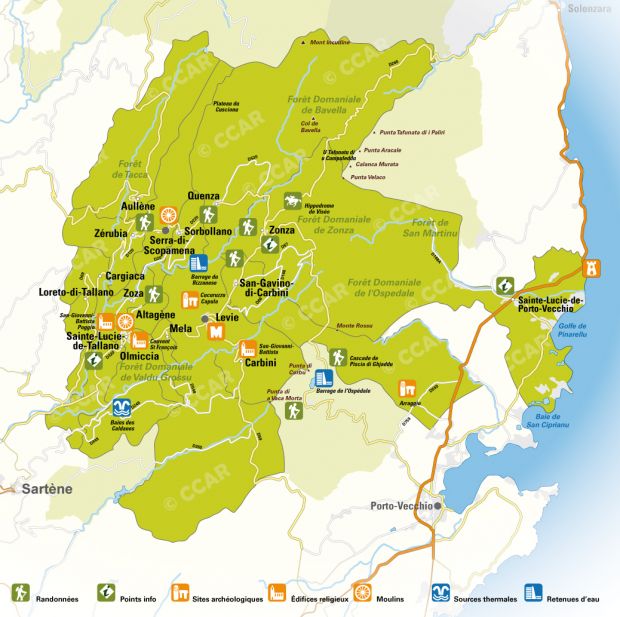 BETWEEN SEA AND MOUTAINS

The Rizzanese originates in the high mountains of the Alta Rocca where it flows out, giving with its tributaries the water necessary to every town.

The diversity of landscapes which compose this area offers a rich and extraordinary flora and fauna. With 9 000 years of History, this paradise of nature is one of the oldest places populated in Corsica. A mess of archeological sites still testify in our days the presence of human being. Named “land of feudal lords” during Middle Ages, the region is covered by a tragic past done of vendetta between Corsican family on the one side, and by resistance on the other side against the Genovese force. Mountain agriculture has been developed from both sides of the mountain.

The different levels of the relief have always welcomed a pastoralism which have formed personalities, culture, craft industry and gastronomy which make today the richness of the Alta Rocca.

The architecture reflects the history of the region, among house of public figure, family accommodation and simple sheepfold. The villages are often squeezed among headlands are made of granite closed high houses along the streets for the protection of the inhabitants.

Many treasures from the past have been preserved which still testify the old daily life: fountains, bread ovens, mills, washhouses… Religion has always been present and we can find many churches, chapels and monasteries from different styles.

The district of the Alta Rocca was created in 1991 by the majority of councillors from cantons of Tallano-Scopamena and Levie. In December, 2000, the district was transformed in Community of Interests of Alta Rocca (CCAR). Today, it is composed of sixteen municipalities. They are worried about pooling their skills and have laid the bet to gather unite in order to highlight and exploit their attractive features.

The skills of the CCAR are concerned with: