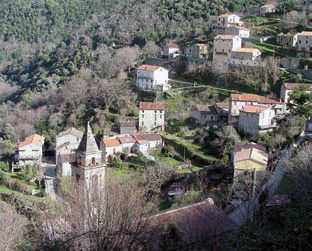 The village built on the hillside has a particularity because it is in the hill shade, on the north side of the mountain. It accentuates the sensation of being encircled by the impressive mountains with the Rizzanese River. Although modest, the sun doesn’t light up so much this environment in winter (the highest point of the municipality is on the rock called Tafunatu 847m high i.e. 2778ft 1029⁄64in).
Actually, a proverb says:

That is to say:

Zoza is unfortunate
In winter, no sun
In summer, no moon

In the South West of the municipality is a rocky peak of 455m high (455m = 1492ft 925⁄64in) called Punta di Casteddu. Its name is due to an old square tower which foundations are still visible. It was built on the Casteddu di Riccio’s place. This tower was called Torra di Casteddu and permitted to control this portion of the Rizzanese River in the 14th century.

The Punta di Casteddu was in the olden days an outpost where Corsican people could see the movements of the Saracen troops in the valley. On the other hand, there is a deep cavern in Punta di Casteddu which, according to the legend, permitted to access to the Rizzanese River.
The different area of Zoza, called Mezza in Su or Mezza in Ghjo, Correntino, Poggiolo, mezza in sopra, Pretrajolo and Chjerchiaja are composed of high granite houses.
The houses present the variety of the area, up casseddu organised in summer residence to the roughcast master house with railings without forgetting the narrow house built like an exposed stone work tower.
Coming from Santa Lucia, from the West entry of the village, a quite big wooden cross welcomes you. It was a local craftsperson’s gift. It surprises a lot because of the hanged tools (pincers, hammers, scales, nails…) which remind the passion of the Christ.
Down below, you can see the granite Church Santa Margharita. Its beautiful lateral bell tower dominates the terrace gardens. On the 20th of July, after the great Mass the inhabitants still organise a procession to celebrate Sainte Marguerite.
In the North East of the village, you can walk to Ponti Vecchju which crosses the Rizanese River.