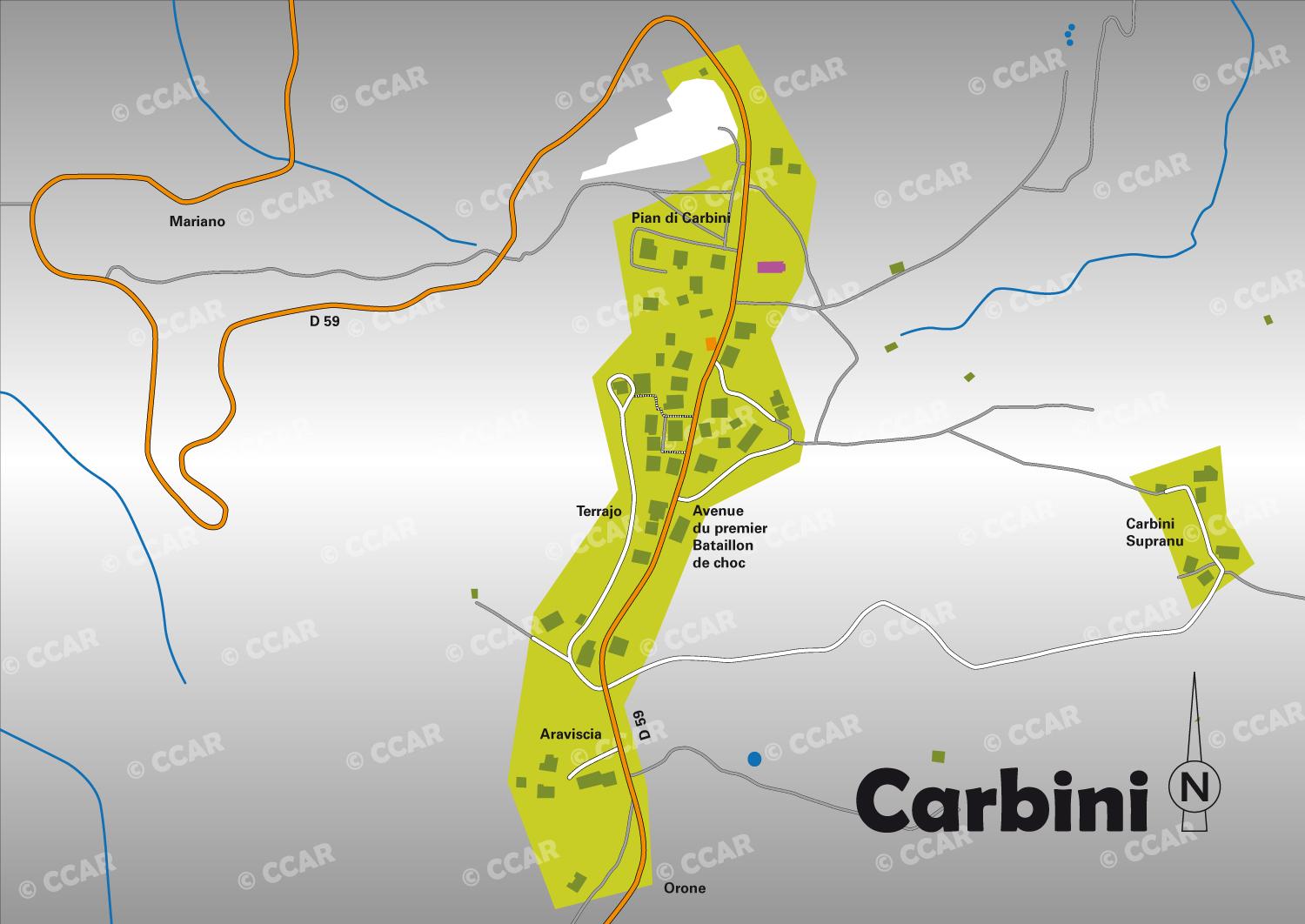 The territory of the present day of Carbini occupies 16.5 km² (6.3707mi²) on the high part of the Fiumicicoli river basin which is composed of green hills  dominated in the south by A punta di A vacca Morta (1315 m; 4314ft 321⁄32in) and its foothill Accintu (1271m; 4169ft 113⁄8in).
When arriving from Sotta, we will find the current hamlet of Foci d’Olmu, Noci and Oronu.
During its history, the village suffered a lot: it was entirely razed during the incursions of the barbarians and was at the heart of a bloody Crusade against the Ghjivannili , a dampened religious movement in the 14th century. In the 17th century, Carbini lost its title of pieve in aid of Levie.

The church of San Giovanni Battista 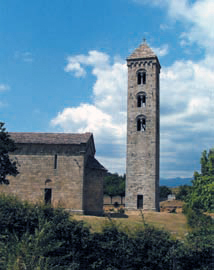 The pievan church of Carbini has a unique nave adjoined with a bell tower separated at the north east of the apse.
A second church of the same style but smaller existed next to San Giovanni dedicated to San Quilico (we can observe the vestiges on the floor). This group was at the early Christian period and in the Middles Ages the religious centre of the inhabitants of the high valley of the Fiumicicoli. In the 12th century the church Carbini came under the diocese of Aleria.

According to the local tradition, the bell tower would be the work of art of Maestro Maternato, the architect from Pisa who realised the bridge on the Rizzanese River. A proverb is still said:


The Maestro Maternato Leith three things in Corsica
The Rizzanese Bridge, the Bridge of Forciolo
And the Bell Tower of Carbini


As it was rising, the San Giovanni’s bell tower was arousing the admiration for its elegance worthy of the most beautiful cities of Toscane. But the satisfaction of Maestro Maternato was getting into worry.

Observant thanks to his profession, Maestro Maternato understood that the sponsors of the edifice would destruct it at the end of the work: it often happened to have the exclusivity of the edifice.
The subtle plan he conceived shows that his ability was not confined to the construction of bridges and churches.
Maestro Maternato slow down work rate and asked for a tool he left at home. The city of Carbini asked some members of the village to go there and get the tool in Forciolo. By a sibylic message, incomprehensible for the persons bringing it, Maestro Maternato said to his family to grip Carbini’s men to confine them illegally to guarantee his liberty. And that is what was done. The persons from Carbini were guarded up to the return of Maestro Maternato. Saved by his cleverness and satisfied of his work, Maestro Maternato could go back to Forciolo peacefully (read La Corse mystérieuse).