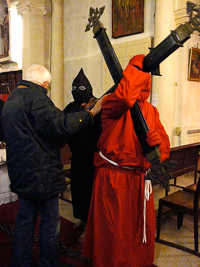 On Good Friday, the villages will commemorate the passion of the Christ through the procession of the catenacciù. The penitent has chains at the feet and brings the heavy cross. Four men dressed in white follow him and six penitents dressed in black are supporting a capony with a  recumbent statue of Christ which is covered by a white shroud. Barefooted, they cross the village and villagers go with them singing without interruption the old penitence song: “Perdono, mio Dio”. U catenacciù falls three times during his suffering before going back to the church. 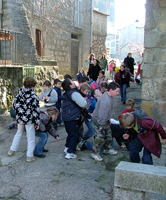 On December, 31th in the early afternoon the inhabitants of Sainte Lucie de Tallano throw money though the windows! For a long time the villagers perpetrate this custom.  In days of yore, people distributed candies to children who passed in the village screaming “O barabo!” A picturesque way to distribute the New Year's Day present!

She knows the signs and gesture which protect or cast a spell. She can break the spell of l’occhju, the Evil eye. For that, she determines the spell and the causes “reading” in a plate full of water where someone has put some drops of oil. If the drops join each other there is a spell. She breaks it cutting the heap of oil. 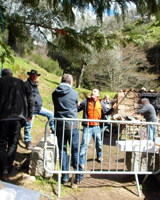 On the occasion of a celebration, men good at writing poesy fight duels called chjama è rispondi (call and response). Real oratorical joust sung in verse, the exercise oppose two improvisers who, without music, play poesy, knowledge, wisdom, quickness and the spirit of their adversary  for the pleasure of their audience. 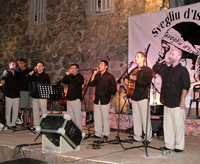